Home MBA A Legacy in the Making
MBAStudents 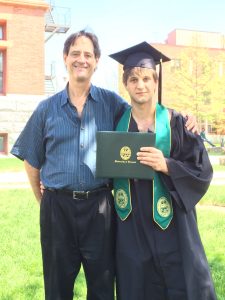 Making the decision to pursue an MBA degree is no easy feat. There are a number of intricacies to consider before determining which program is worth the commitment. For Julian Ames (MBA ’20), his decision was made easy – it was a choice to continue his father’s legacy in his favorite city.

Originally from Washington D.C., Julian earned a psychology degree from the University of Vermont. After graduation, he worked as a youth counselor, personal trainer and in the sales and digital marketing sectors. While he found success in his position, he knew that in order to move up in his career, obtaining an MBA from a prestigious university was the logical next step.

“I decided to apply to a number of MBA programs because I wanted to have options, but I wasn’t sure what I really wanted,” he said. “I got accepted into a number of programs, such as Northeastern, Maryland and Pepperdine, but none of the programs stood out to me. I was looking for a program that could help me channel my interests and passions into a career, or help me start a company of my own.”

Whenever Julian sought advice, he turned to his father Brian. An accomplished entrepreneur and economist, Brian was a graduate of Harvard Business School who emphasized the importance of hard work and education in Julian’ life. Brian was born and raised in La Mesa, a city within San Diego’s city limits, and spent a number of summers visiting his beloved hometown with his family in tow for vacation. The first time Julian stepped onto the warm sands of Mission Beach, he pledged to find a way to return to San Diego for good.

Julian and Brian devised a plan to make that dream a reality – Brian would retire and pursue entrepreneurial efforts, and Julian would apply for the MBA program at the Rady School of Management.

In addition to its proximity to the beach, Julian was drawn to the Rady School for its unique approach to business school. Although the school presents opportunities for students to connect with top-tier companies, Julian appreciated the emphasis on innovation and entrepreneurship – traits his father asserted were imperative to his success in the business world.

In July of 2016, Brian was diagnosed with a glioblastoma brain tumor. Despite his uncertain future and a schedule jam-packed with doctor’s appointments, surgeries and treatment plans, Julian and Brian made the decision to soldier on with the plan.

And then the acceptance letter came – Julian was accepted into the Rady School of Management Full-Time MBA program.

“I remember that moment vividly — when I opened my acceptance letter, my dad was so pumped,” Julian said with a smile. “He was so excited for me, and he was also, in a way, pretty pompous – knowing that he had inspired me to do this, and seeing me follow through with goals I set for myself.”

Soon after Julian received his acceptance, Brian’s condition took a turn for the worse. Julian chose to defer his acceptance to the Rady School and leave work to spend time with Brian. Brian passed away on December 21, 2017.

“I can’t speak enough about how wonderful of a human being he was in all facets of life. He wasn’t just my father — he was my best friend,” Julian said. “He was my mentor in life and in business. He was extremely intelligent, outgoing and easy to get along with. A real bright light. We had always planned to drive across the country together and move out to San Diego, so to honor him, I followed through with our plan.”

Confronting grief while pursuing an advanced degree is not an endeavor for the faint of heart, but Julian finds strength channeling his father’s spirit – in perseverance, determination and positivity.

Julian embraces his father in all aspects of his life, applying his work ethic to his schoolwork, jobs, fitness and entrepreneurial efforts. He looks to the advice – both solicited and unsolicited – that his father bestowed upon him in times of uncertainty and to find strength in facing challenges. But when asked about his decision to attend the Rady School of Management, Julian is confident he made the right choice. As he approached the midpoint of his first quarter, he reflected on the facets of Rady that attracted him to the school in the first place.

“If your goal is to be an entrepreneur, more focused on the startup experience, the Rady School is the perfect place,” he 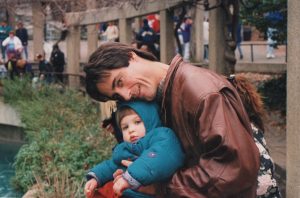 said. “If you’re aiming to secure a specific job title at a company you’ve had your eye on, Rady can help you with that as well.”

While Julian is interested in pursuing a number of career options – such as product development, large-scale marketing and even developing his own fitness resort — he is excited to explore the entrepreneurial opportunities, with prospective company ideas abound.

“I’m looking forward to getting involved with the StartR Accelerator, as well as Lab to Market because these entities can actually facilitate funding and guidance for your ventures,” he said. “These programs make Rady unique – there are several entities in place that are geared towards entrepreneurs and startups.”

To say Julian has hit the ground running would be an understatement. He has already leveraged the Rady Alumni Network, reaching out to alumni to connect with potential internship opportunities, is signing up for career fairs, making friends with his cohort and reaching out to faculty — all things he believes his Dad would have suggested.

“It’s definitely been a challenge, but when I let that ‘Brian Ames’ part of me come out, all good things happen — in relationships, in business, in all aspects of my life. ”

Congratulations to the 2022 Rady Student and Faculty...

My Experience on the Bay Area Trek

My Summer Internship at Solar Turbines

The Complete Guide to Your MBA Internship